2019/20 may be a lost season but that doesn’t mean we can’t celebrate our teammates. Please join us in congratulating the following award winners:

Thank you to everyone for a short but great season!

Here’s the schedule for the exhibition matches on October 3rd.

This will be the one and only exhibition match for all teams.  The regular season kicks off on October 10th.

The 2018/19 teams have been set and you can see where everyone landed via the individual team pages.  There will be one preseason match on October 3rd.  The season officially kicks off on October 10th.  More information to follow in the upcoming weeks.

Every year the captains get together to vote on a player of the year.  There’s always a handful of nominations with many strong arguments for all of them.  We can only choose one though.

Dillon was a force everywhere on the pitch.  Although a defender by nature, he finished as top goalscorer with 25 goals in 22 matches.  The dedication he showed to his team and the league was outstanding.  He was both a great teammate and competitor.  It’s not just what he did on the pitch, but also his positive attitude in embracing the league and everyone in it.

What many people don’t know is that Dillon’s story almost never was.  The league had room for 72 players and Dillon was number 72.  In addition to that, he joined after the draft was complete and it was only because Lightning was one player short that he donned the yellow jersey.  Seven months later and that Lightning team were crowned champions.

Last season’s POTY and Dillon’s teammate Seamus Lynott had this to say:  “It’s much easier to score goals when you have a teammate like Dillon to do everything else for you.”  Praise from Caesar.

Congratulations Dillon.  Good luck in school and you’ll always have a place in this league.

The tragic events that occurred at Yonge & Finch this week have impacted all of us.  Our soccer league is a strong community and we band together in times like this.  We’ve decided that the championship match, along with the consolation matches should be postponed for one week and instead played on Wednesday May 2nd.  Additionally, the year-end celebration has been postponed until further notice.  The hope is to reschedule later in May.

Join your friends to celebrate a successful 2017/18 season.  Talk about the great moments while enjoying some pizza.  Sit back and let the champions regale you with tales of heroism.  Hope to see you all there!

These are the 3 quarter-final matchups:

The three winners will move on to the semi-finals along with a wild card team.  Criteria for the wild card along with a full preview to come next week.

Seamus Lynott has been named the 2016/17 player of the year.  The award was voted upon by the team captains and after 3 rounds of voting, Seamus emerged as the winner.  This award complements his Golden Boot award as the top scorer in the season.  Previous winners include Sean Kinsella and Daniel McNiece.

Please join me in congratulating Seamus on winning this prestigious award!

The draw for the semi-finals of the Teachers’ Champions League took place this morning.  It was conducted by Paul Callahan and in attendance were Nicholas Ress for the Spartans, Daniel Newman for Clubber Lang, Christy Gnanapragasam for D-Mentors and Ivan Gojmerac for Cobra Kai.

A semi-final preview will be provided next week. 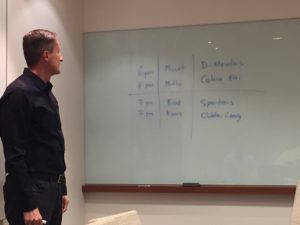 Having scored 27 goals in 18 games, Seamus Lynott is the 2016/17 Golden Boot Winner.  Those goals were a big factor in the Barons’ great season and brought them a lot of wins.  While they have many other good players, Lynott’s efficiency in front of goal was outstanding.  Once he had a sight of goal, if he was shooting he was scoring.  Here are some of the stats from his incredible season:

Seamus joins some elite company as the previous 2 winners of the Golden Boot were:

This marks two consecutive years in which the Golden Boot winner hails from Ireland.  However, there was nothing lucky about it.  Kinsella’s been telling his story at every pub in Dublin, now Seamus can do the same.  Congratulations to Seamus Lynott on winning the 2016/17 Golden Boot and in doing so, bringing the: